Pam and I were to be married Labor Day weekend 1971 prior to my deployment to Vietnam. She was a nanny to Lieutenant Colonel Tony Spackman, the British Liaison Officer at Fort Sill. We met in late summer 1970 at the Artillery Hunt, where I was riding to train for the US Modern Pentathlon Team. I’d been offered a three-month trial at Fort Sam with the team after winning the Army triathlon championship in 1970 at Fort Sam. I elected to defer it since I had just changed jobs, just having started to teach artillery survey at the Target Acquisition Department. Since horseback riding was one of the events, I started riding and taking lessons, half boarding a horse at the Artillery Hunt. The Non-commissioned Officer in Charge (NCOIC), a crusty Sergeant First Class (SFC) with a penchant for chewing tobacco, played matchmaker and steered Pam to the horse I was half boarding.

We met, and since Pam was planning to take an American history class at Cameron Community College, I offered to take her since I was taking some biology courses for premed. Our first “date“ after class  the first night was to a local bar where Pam, on her salary of $17 per week, bought the beer – my wallet was empty after paying cash for gas. In spite of that, we fell in love. A classmate returning from Vietnam, spent a night with me. “Why are you getting married before you go to Vietnam?” he asked, “you may not come back, or you may be gravely injured, Pam could be pregnant.” I (no discussion, a lousy never repeated process) announced to Pam the next day that we wouldn’t get married before I went to Vietnam.  After the MATA CORDS course for Army officers with orders for Vietnam as advisors that was located at Fort Bragg, I attended Defense Language Institute at Fort Bliss studying Vietnamese. However, as I walked in for my final exam in November 1971 was informed my orders were changed, I was heading to Korea in January 1972, instead. God has a sense of humor!

Prior to deploying to Korea, I spent a week in England, reconnecting with Pam and meeting her family. Communication by snail mail in those days took about a month for a letter and reply. Phoning was $10 for three minutes payable in advance, so I only called late at night to England, ensuring that Pam would be home with her parents. When we decided on the wedding date Pam said Tuesday, May 22. However, actually May 22 was a Monday, I discovered later. Are we getting married on Monday or Tuesday? This is about three weeks before the wedding date. Some logistical issues – can Rick Frykman, my best man and West Point classmate, get there? He did!

I also asked John Feagin, our orthopedic surgeon while we were cadets and later, my first orthopedic mentor. He was in England doing a total hip fellowship with Sir John Charnley, the “father” of total joint surgery in Manchester. John, and his family arrived in their black taxi for our wedding.

I arrived several days prior, about May 19, after making the trip from Chun Chon (1/42 FA) to Seoul, where I met the 10 Korean orphans, aged 9 months to five years, from Holt Adoption Agency that I was to escort. (I learned about the need for escorts for Korean orphans at a cocktail party. I let the Holt Agency know that I was willing if they had anything available at the time I wanted to travel to England. I was considered a temporary employee of KLM at that time and I returned to Korea under that temporary assignment with Holt.)

Getting from Korea to England wasn’t easy in 1972, nor was it inexpensive. Working as an orphan escort solved those dilemmas. Flying was more lax in 1972. I was usually caring for one child on my lap and at least one child on each side seat. While in the air, there was a constant round of feeding, diapers, calming and entertaining the kids. God bless the flight attendants who helped provide some “adult supervision”. An “older woman“ (about 50 whose husband was at the British Embassy) was the other escort. She knew her limitations. She cared for 2 to 3 of the kids leaving the remainder to me and the KLM flight attendants. We flew from Seoul to Tokyo where we changed planes, then to Anchorage where we refueled, then on to Amsterdam where six of the children and the “older” escort left me. The four remaining kids and I flew to Gothenburg, Sweden, two to meet their new families, and then the remaining two and I flew to Oslo. After leaving the two children with their new families there, I flew on to Heathrow.

After about 35 hours in airports and planes, I transferred from Heathrow to Paddington station exhausted. My brain at that stage wasn’t firing on all cylinders. I remember stopping to buy an orange and candy at a kiosk in Paddington and just holding out my hand and letting the vendor take some pounds. After spending in Korean won, Japanese yen, American dollars, Dutch guilders, Norwegian krona and British pounds without sleep my brain was thoroughly muddled! After getting to Codsall and Pam’s family, it was wonderful, after tea, to get horizontal in bed for a few hours. The next day, Pam and I went to the railroad station to pick up an “aunt“. While standing there, I remarked to Pam how much a woman walking towards us looked like my mother. Pam replied, “It is your mother!”

After the wedding and a brief honeymoon, I flew back to Korea and recovered from my jet lag to England by returning to Korea.

While doing my orthopedic residency at Tripler in Hawaii in 1977, we adopted Rachel at 10 months, a Holt baby. In 1987, while on Temporary Duty (TDY) to the 121st Evacuation Hospital in Seoul, Pam brought both our daughters to Korea for spring break and we visited Holt Adoption Agency thus closing the loop.

What has being a member of the West Point class of 1969 meant to me? My moral compass continues to be aligned with The Cadet Prayer.

The friendships from cadet days and subsequently through assignments, mini-reunions and other activities and experiences have been rich and treasured. Cycling, skiing, safaris, as well as the cruises, a cup of coffee or wine with classmates has led me to appreciate the depth and breadth of shared life experiences with our class family. When I stood at Trophy Point on July 1, 1965 and subsequently at parades and in the reviewing stand, the memories leave me humbled and thankful for being a part of such a great class and institution.

In the early 1990’s it was becoming clear to a group of doctors and other medical professionals that there were many needs at Madigan Army Medical Center at Ft. Lewis, Washington that were going unanswered. There was no extra money to address these problems and no one to call on to try to help those in need. So was born the idea of creating an organization that could help the individual soldier and their families when they found themselves without the resources they needed. 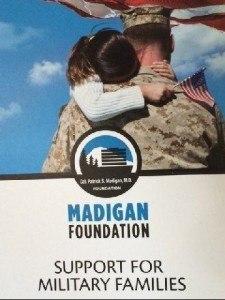 The COL Patrick Madigan Foundation was incorporated in April 1995 in Washington State and recognized as a 501 (c) 3 organization by the IRS. I am one of the original board members and the third president. It was set up to help provide for unmet needs at Madigan Army Medical Center at Fort Lewis (now JBLM, Joint Base Lewis McChord), Washington. Its mission since founded has been to support patients, families, staff, research and education. It is the first foundation established to support a military medical center. The Foundation is a Combined Federal Campaign (CFC) recipient and has given over a million dollars to support the mission with help from grateful patients, their families, and corporate donor support. Helping over 3,000 people per year, the Madigan Foundation has made contributions to support the Warrior Transition Battalion since 9/11, mostly to wounded warriors.

Seeing the many needs of military families, the Madigan Foundation has provided for military children with special needs like the Young Heroes program to include 4 annual college scholarships for 4 years to children with disabilities, and the Vision Support Program which provides special glasses to those children qualifying. Specialized equipment for children to make them more mobile and strollers and car seats to over 300 young enlisted families have been provided. Nursing mothers of hospitalized infants are given hundreds of meals annually, and a breast pump program for active duty mothers lead to it being adopted by the Department of the Army. Respite care for families with disabled children and child care vouchers for mothers and families getting medical care or counseling are ongoing services provided. Dental screening has been provided the past 2 years to 3 local elementary schools for almost a thousand military dependent children. Cancer patients and their families are supported as is a breast garment program and information kiosks. Residents are provided with meals while working overnight, a requirement of the residency training programs; and exercise equipment for them to use while working after hours has been made available. Meals have been provided for those who were fasting in the Emergency Room until allowed to eat when food service was not available and taxi service provided for those brought in by ambulance when transportation home is needed.

To assist and recognize the Madigan Hospital staff, the Traumatic Brain Initiative Program, the first in DOD, has been supported along with training and research needs that might never be funded. Outstanding research is awarded annually to a graduating fellow, the annual research day and the annual MG Jack Gamble lectureship on military medicine are also supported. Nurses are appreciated with an annual award and scholarship.

The presidents of the Madigan Foundation have been LTG William Harrison, MG Jack Gamble, myself, COL Dick Hoffmeister, MG Les Burger, COL Al Buck, and MG Burger consecutively, all retired military. All of these individuals have been instrumental in offering their time and energy to the welfare of so many soldiers and their families assigned Ft. Lewis/McChord Air Force Base. Working with them to support the active duty and retired men and women working at and treated at Madigan along with their families has been quite gratifying to each of us. The thankfulness of those who the Madigan Foundation has helped continues to be a source of great satisfaction. The website, Madiganfoundation.org provides more information and is updated frequently.

The lessons learned at West Point, to include the Cadet Prayer have been my compass, leading to many leadership opportunities in medicine and with other organizations, the Madigan Foundation and church. “Cooperate and graduate” and “there is no “I” in team” have been often quoted over the years. The Cadet Chapel Choir and Glee Club have lead me to a men’s ensemble at church, a barbershop quartet, and being a Bible Study Fellowship leader.
My wife of 42 years, the nanny for the British Liason Officer at Ft Sill, who I met over a horse, has been a source of great strength and another compass. Our daughters, both teens while at West Point, remember their time there warmly. Our older daughter, a Duke grad, now practices general surgery nearby and our younger daughter has blessed us with 2 grandchildren and works near my office.
The opportunity to help with 3 reunions has helped to stay more connected with classmates and spouses in spite of living near Ft Lewis in the “other” Washington.