The Mission of the Signal Corps

The United States Army Signal Corps (USASC) is the communications branch of the Army. It develops, tests, supports and manages information systems for the command and control of the battlefield. 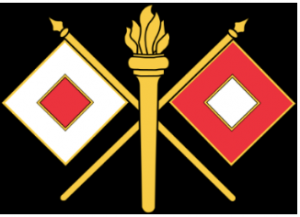 History of the Signal Corps

An Army doctor, Dr. Albert J. Myer, first suggested having a trained military signal service while he served in Texas in 1856. His suggestions were adopted on June 21, 1860. He was the first and only Signal officer at the inception of the Signal Corps. During the Civil War, the Signal Corps operated air balloons and telegraph machines as well as the using the concept of sign language in a semaphore system incorporating red and white “wigwag” flags. In 1870, the Signal Corps established a national Weather Service as mandated by Congress. In 1898, during the Spanish American War, the Signal Corps began using telephones on the battlefield and combat photography. In World War II, the Signal Corps produced training films for Army and civilian purposes and documented combat missions as well as evidence of Nazi atrocities including at concentrations camps.

Motto: Watchful for the Country.