In late August, Bill and I returned to Germany for our honeymoon following our wedding in Southern Illinois. At the time, he was the Battery Commander of B Battery, 1-36 FA in Augsburg. Bill had planned a fairy tale honeymoon in Berchtesgaden where we stayed in the historic General Walker Hotel, formerly the Platterhof. (To us, The General Walker Hotel was just a beautiful, old hotel used as a recreation center for American soldiers serving in Europe. In fact, the Platterhof had been used by the Nazi party from 1936 and one room is known as the place where one chapter of Mein Kampf was penned. The Platterhof had tunnels and bunkers that connected it to other Nazi sites around Bertschesgarden. This was not Bill’s first touch with Germany’s recent dark history – his first assignment after graduation from West Point was to Dachau, site of one of the most infamous concentration camps of WWII. He

and other bachelor officers lived in the barracks that had served as home to the concentration camp staff officers.) During Bill’s honeymoon leave, we went on a lovely cruise on the Konigsee, to Hitler’s Eagles Nest, and on a tour of nearby Salzburg, Austria. One evening, we were told that at twilight the Olympic torch bearers for the 1972 Olympics would run past the hotel, so we were there to join in the festivities – an added treat since we had tickets for early September for several Olympic events including field hockey and swimming in Munich and canoe slalom in Augsburg.) I had purchased tickets for these Olympic events while I was in the U.S.A. (American military members could get Olympic tickets, but only by lottery. On the other hand, I was able to purchase tickets in the US – whatever was available when my request was received.) It was a great treat for my family when the tickets arrived at our home in our small Midwestern town. Who else in Centralia would be going to the Olympics? I was even given press credentials by my hometown newspaper in case I was able to use it in some way when I arrived in Germany. I was not able to translate these hometown papers into official press credentials, but I did write an article for the Centralia Evening Sentinel after attending the games.) 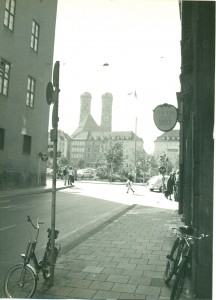 We should have known in the era of the Vietnam War that our fairy tale could not last long. Many of Bill’s friends and classmates were serving not in Germany, but on the battlefields of Vietnam. In fact, he came home from his first day back to work after our honeymoon with orders for Vietnam. His three years in Germany would be over in January, so he had been awaiting orders for his next assignment. Being unfamiliar with Army life, I had not been aware of what might be lurking around the next corner! We had no time to dwell on that assignment, months in the future, because life in B Battery kept Bill busy and I was learning what it meant to be a part of Army life. In those years of the draft Army in Germany, Bill was dealing with racial tensions, and alcohol and drug abuse among his soldiers; many had been given a ticket to join the Army instead of going to jail! He had had a knife pulled on him during barracks room inspections and had been pushed down the stairs by a disgruntled soldier; he even had his tires slashed twice. His car set idle for months while his father in St. Louis tried to figure out how to purchase and ship tires to him – no German tires would fit his graduation Pontiac LeMans. Besides personnel issues, his main task as the Battery Commander of an 8 inch nuclear-capable howitzer battery was to be accountable for all the equipment, maintenance and strict standards in preparation for their use should they be called upon on that frontier of the Cold War. Quite a responsibility for our young officers!

Bill was able to break away from his responsibilities for a little while so that we could use our Olympic tickets. It was a festive experience; we were in Munich only a few days before the Olympic Massacre of the Israeli athletes. That startling and horrifying tragedy brought a pall over all of Germany and having just been to the Olympic site ourselves, it was a great sadness to us. We had no idea what was to lay ahead just a month later in Augsburg.

In mid-October, we were jostled from sleep by a phone call about 4 a.m. Bill got into his uniform and left immediately without explanation. The battalion was having its monthly hail and farewell later that evening. I did not hear from Bill throughout the day; I had no way to contact him at the battery so I had to wait patiently for news from him. Having taken a cake decorating class, my most recent project was expected to be a part of the refreshments for the get-together, so I needed to get to Reese Barracks to help set up the refreshments; Bill had our only car so that was beginning to seem impossible. As the time for the event approached, I decided to call the Battalion Commander’s wife to let her know I might not be at the hail and farewell, after all. She was not surprised because her husband had had the same early morning call and she had not heard a word from him all day, either. By the next day, we knew why. They had been dealing with a puzzle: several German nationals had been murdered and a German-national wife of an American soldier had been attacked and raped. Our husbands had been working with the MP’s, the Augsburg Polizei and CID trying to figure out who had done this horrible thing. It took several days to get the puzzle pieces put together. During that first day, clues developed that indicated soldiers in 1-36 FA might have been involved. It took several more days for the story to become clear. One soldier bragged to his barracks roommate that he had been involved with the incident with several other B Battery soldiers – the roommate did not believe him. At that, the bragging soldier said, “Let’s go, I will show you where we left the bodies.” Gruesome, but true. When they arrived at the site, the police were there and immediately arrested the soldier, who was still bragging. It was then easier to find the other two soldiers. Bill spent much of the rest of the time left in Germany coping with judicial hearings, visits to the prisoners in Nuremburg, and caring for relatives of the accused soldiers who arrived without warning. All three soldiers were eventually convicted of both murders and the rape and because they were not were considered adults by German law, they could only get a maximum sentence of ten years in a German prison. Because of the proximity to the Munich Olympic Massacre, the people of Augsburg, who were rightly enraged by the actions of these soldiers, called this incident the Augsburg Massacre. It was a difficult blow to German-American relations at that time.

Bill’s last months in Germany were exceedingly eventful and stressful. In late January, with our household goods packed for shipment and the car steaming toward the U.S.A., we spent the last few days in the transient quarters. While we were there, we heard on the radio that U.S. Secretary of State Henry Kissinger had negotiated an exit for U.S. troops from Vietnam. THE WAR WAS OVER! Now, where would Bill go? When he called the Military Personnel Center in Washington, DC, they said just to go home and wait for a call, so that is we did. We were happy to leave behind the difficulties of the past few months, but wondered what might be next!