Most people think that a big bureaucracy like the U.S. Army, one of the largest organizations in the world, must be quite impersonal. At times, it certainly feels like that to the individual soldier. Paperwork, requirements, deadlines, “hurry up and wait” all contribute to that feeling. However, at its base, the U.S. Army is made up of people, many amazing and caring people who look after those with whom they work and on whom they depend each day. The soldiers of each command are responsible for each other and for their family members – at its heart, it is a very large family.

One day in March 1974, as I sat at my desk at St. Louis High School at Camp Stanley, I received a call from the Assistant S-3 of the Division Artillery. As I answered the call saying “St. Louis High School” and learned that the call was from the DivArty Headquarters, I assumed that the call would be some sort of St. Louis High School business; perhaps, a soldier in the Headquarters would not be available for class that day. I was intrigued when I was asked to give the Assistant S-3 my social security number and “don’t tell Bill.” They would call me later with more information.

It would have been quite difficult for me to tell Bill anything at that time, because he and his battery were at Firebase 4P1 near the Demilitarized Zone and we had little communication while he and his soldiers were training there “in the field.” Even though I had no idea what the secret was, it was not a hard secret to keep since I had many things to do to get ready to leave Korea for Bill’s next assignment at the Field Artillery Advanced Course, at Ft. Sill, Oklahoma. I had to hand over the St. Louis High School program to another program director and to prepare our limited household goods for shipment back to the U.S. A. 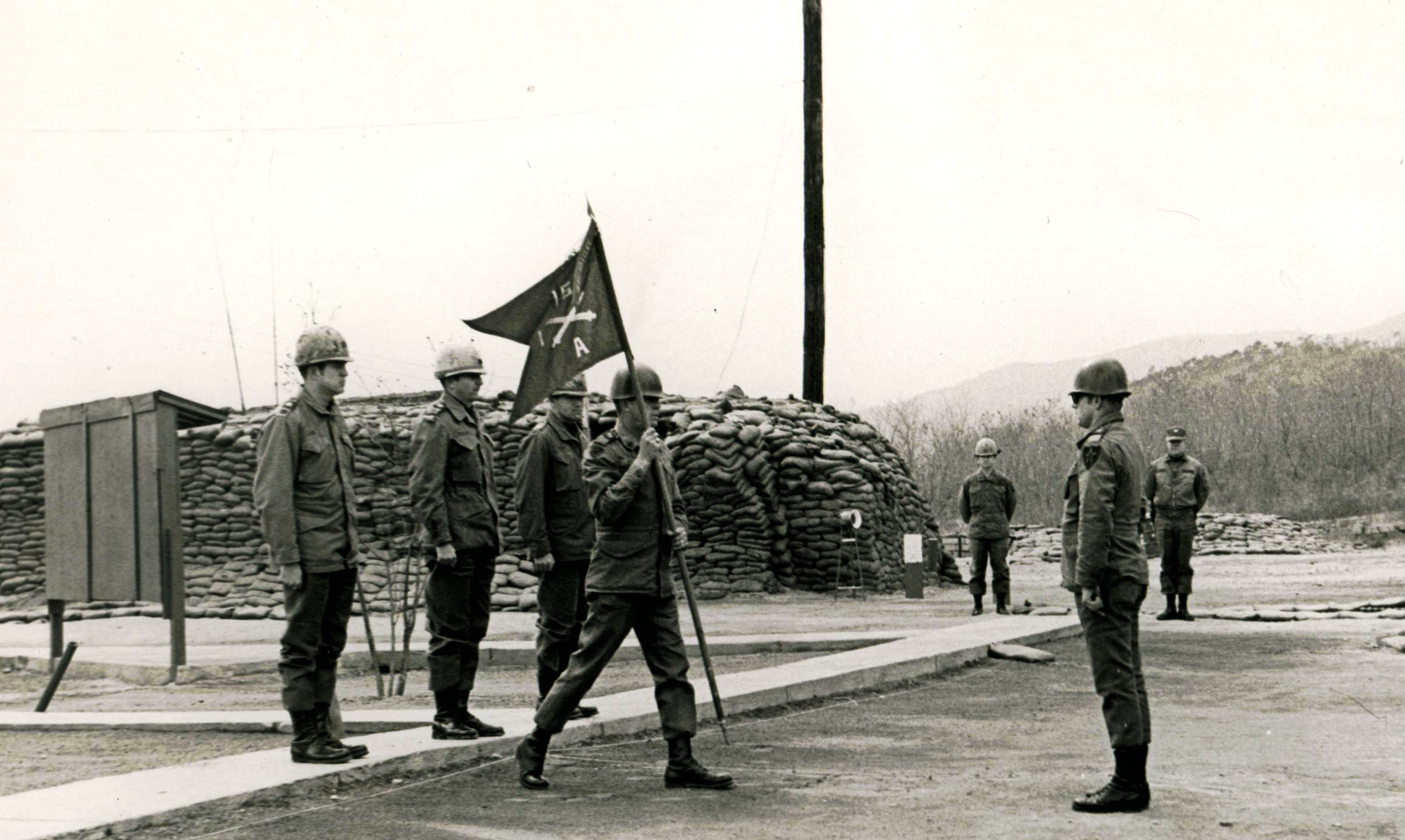 Not long after the first call, I had a second call explaining to me what the mystery was. The Division Artillery Commander had come up with an amazing adventure for me and for Bill, whose battery had won the DivArty “Best Battery” competitions twice in the year he was in Korea. As Army timing would have it, Bill’s Change of Command ceremony, officially handing command of his battery to another battery commander, would occur at 4P1 rather than at Camp Stanley where most of these ceremonies took place. I had been to several Changes of Command already and if Bill’s Change of Command had been at Camp Stanley like the others, I would have walked over from the St. Louis High School office to stand at the periphery to watch and later to congratulate the out-going and in-coming commanders.

Bill and his battery had gone to Firebase 4P1 innumerable times to train (two weeks out of each six weeks throughout the year-long tour in Korea) where they were to support U.S. Army MP’s who were the only ones allowed in the DMZ itself and were a sort of “trip wire” should there be some provocative incident from the North Koreans. Because they had spent so much time at 4P1, it seemed quite appropriate that Bill would change command there. It was also clear that I would not attend that ceremony. 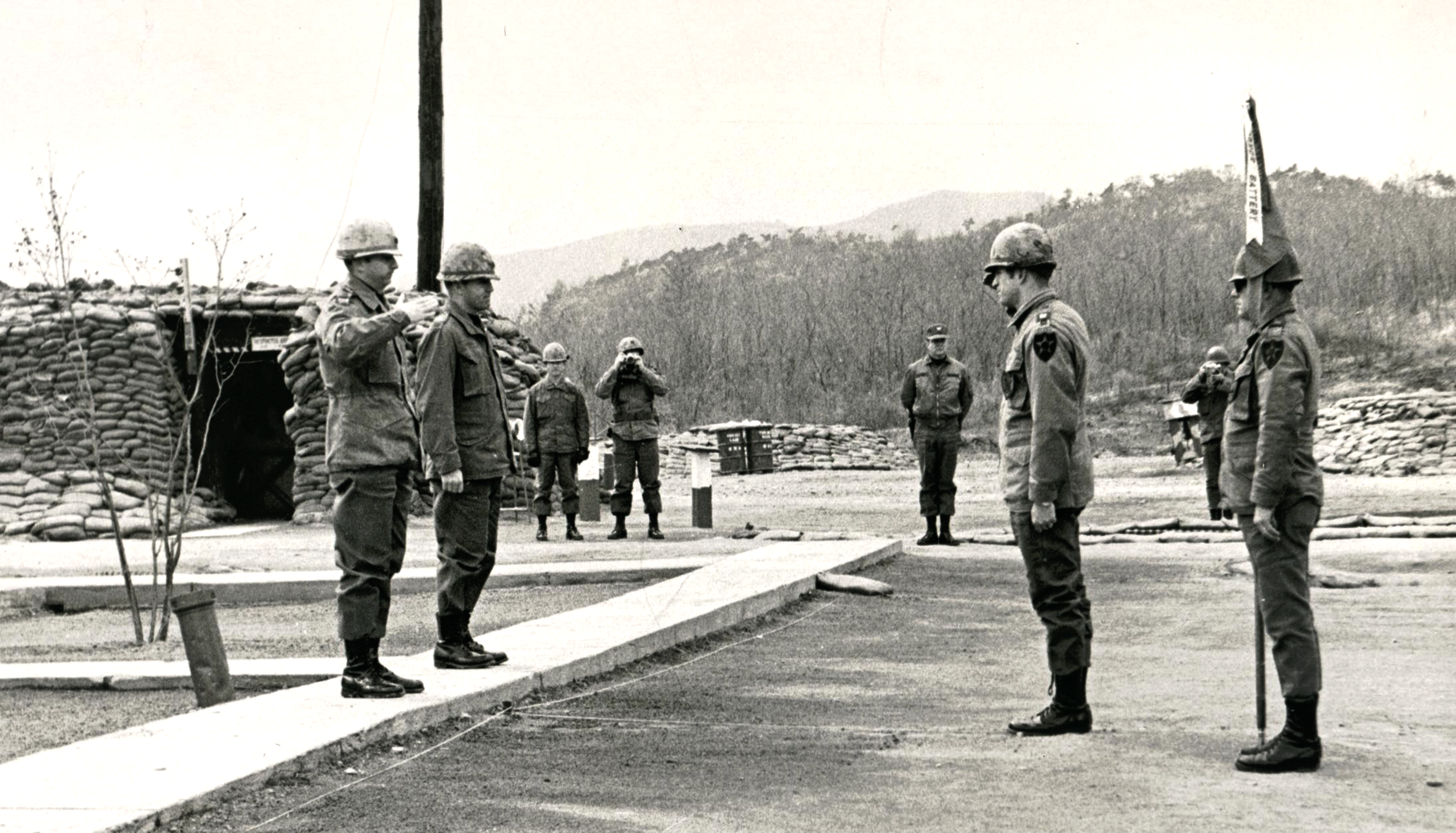 The DivArty Commander had a different idea – he would bring me along as he and his Assistant DivArty S-3, went up to 4P1. Civilians were not allowed that close to (less than 2 miles) the Demilitarized Zone except on closely guarded and supervised bus tours to Panmunjom. How to get me to the Change of Command? The DivArty Commander decided to fly me in his helicopter. In order to do that, official orders were cut for me. With those orders which required my social security number, I became a member of the crew. On the way up to the ceremony, the helicopter was manned by the pilot and the DivArty Commander in the front, the Assistant S-3 and me in the back seats!

My presence at the Change of Command was kept a surprise to all at the ceremony until I came walking down the sidewalk at the side of the DivArty Commander with the Assistant S-3 following behind us. Bill was completely shocked to find me at the ceremony, but it went off without a hitch. There was a 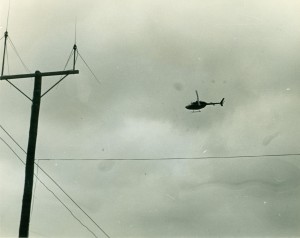 nice reception in the mess hall, thanks to the good cooks of the battery, to welcome their new commander. When Bill had said his brief goodbyes and the DivArty Commander was ready to return to Camp Stanley, he told Bill to come along to the landing zone. It was not clear how five of us were going to go back in the helicopter meant for a crew of four. And what about Bill’s field gear? Problem solved: the Assistant S-3 would stay behind and find a ride back to Camp Stanley later; he would bring Bill’s gear back with him. As we left Firebase 4P1, the DivArty Commander told the pilot to “buzz” the base as a special farewell to A Battery 1-15 FA.

Forty years later I learned from another officer who had been in the DivArty Headquarters at Camp Stanley at the same time in 1973-74 just how close I had been to the North Korean border. Not sure how many other civilian wives were given that amazing opportunity – it was a great honor to be treated so well by the officers and soldiers of our U.S. Army. The Army is not so impersonal, after all!