Our class went through four years of West Point figuring that it was preparing us for a career of traditional military service.  That assumption was essentially correct, although in our lack of depth of understanding of what was “traditional” we were endlessly surprised in the years that followed by exactly what our duties entailed.  As it turned out, you see, the only tradition we should have expected was dealing with the unexpected.  However, West Point had done its job well and when the time came most of us figured out what to do and got it done.

I had a few such moments, but one of the more interesting was being tagged to draft the operational doctrine for the Army.  The Army produces tons of doctrinal manuals, but the keystone of all those ton is its central warfighting manual, known throughout the 20th century as Field Manual (FM) 100-5.  The military is one of the two great institutions that takes its doctrine seriously (the other being the church) and no branch of the military takes it more seriously than the US Army.  Hence, it is modified only every few years and only after much consideration and debate, heavy bureaucratic infighting in the competition of ideas, and ultimate directive of the Chief of Staff of the Army.  Once approved it will dictate the Army’s organizational structure, major equipment procurements, branch integration, soldier training, and officer education for a decade or more.

Shortly after the end of the 1991 Gulf War, I was assigned to Fort Leavenworth to be the Director of the School of Advanced Military Studies (SAMS), where I had been a War College Fellow a few years prior. 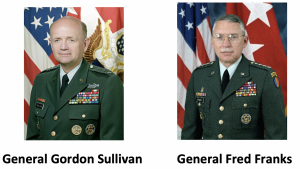 I suspected that drafting a new 100-5 would be part of my assigned duties.  A former director of SAMS (then Colonel Huba Wass de Czega) had drafted the 1980s versions focused on AirLand Battle.  But by 1991, the Soviet Union had dissolved, and the United States was facing new types of threats and challenges around the world.  So, having written a book on leading a platoon, it was only natural that I would be the drafter of the keystone doctrine, an extra duty that would consume the better part of three years.  And so, it was to be (big “Gulp!” here).

The Army gave me all the help I could possibly need.  I was given full support in picking a crackerjack team of six fine officers from around the Army (one of whom was our classmate, Gary Steele).  I also had able input from the available student talent at the school – extremely competent War College Fellows (including classmate Bill Rice (https://thedaysforward.com/bill-rice), the bright young SAMS officers (captains and majors) who were chock full of good ideas, and a brilliant faculty of experts at Leavenworth on the operational level of war.  Immediately, General Sullivan put out a call for input from his senior generals and all branch chiefs and opened the door to retired general staff officers as well.  Add to that the team at TRADOC (who had a strong interest in what came out), and perhaps most importantly the keen interest and leadership of General Sullivan and General Franks (both of whom were personally involved and who shielded me amongst the rough of tumble of contending ideas between high-ranking and often iconic senior officers).

All the above took part in the building of the final product.  SAMS students, for example, were invited to offer ideas, provided they wrote a short paper arguing their point(s).  Then other students would be invited to take an opposing view and a group of them would debate the two sides.  If an idea so offered was worthy, it very well could enter a draft. At a much higher level, the Chief of Staff and TRADOC commander would host various meetings of senior officers (e.g., Army Staff 3-stars, Branch Chiefs, four-star commanders, and others) where yours truly would offer up the drafts to that point (usually written and circulated in advance) and brace himself for the feedback (not always glowing commentary, as it happened).

Retired senior officers were not at all shy about offering their views, in a variety of ways. My favorite among the latter was LTG (R) Jack Cushman (First Captain, West Point Class of 1944) who called one morning and suggested I go to the Leavenworth archives and review his writings.  Accustomed to such calls, I showed all proper military protocols and promised I would.  He then called the following morning (at 0700) and asked me what I thought of them, whereupon I confessed I had not yet been to the archives.  The following morning at 0700 when the call came, I was ready.  His input was wonderful, I must say.  He had a penetrating grasp of the Army and its doctrine.  One paper of his, penned in 1956, dealt with the concept of “air-land battle” (27 years before it entered FM 100-5).  He and many others had great input to the doctrine.

None of this was done in the shadows; there were no hidden agendas.  Successive drafts were shared endlessly.  As we neared the end, a part of the job was to sell the product (Gary Steele was a star here – https://thedaysforward.com/gary-steele-tight-end-army/), not just to the Army and our sister services and our allies, but to the public as well, both via the media, publications,  and in various forums (one, for example, being John Lucas’ law firm in Richmond).

With such leadership from the top down, a well-resourced team effort, and endless debate based on the collective experience of all involved, the 1993 version of its operational doctrine set a new course for the Army as it closed the 20th century and entered the 21st.

Okay, so then why is boxing in the title of this essay?

Well, you see every written effort must have a central concept that ties the entire body of work together – even if that theme is not explicitly articulated in the body of work.  In this case, the objective was to formulate the Army’s central warfighting doctrine.  While that effort encompassed many of the best thoughts of military theorists, historians, combat experienced generals, and other experts over the centuries (without being named in the text), my own touchstone was the three principles of Plebe boxing – the ability to move, to hit, and to protect.  They must be conquered in various combinations and sequences (hit, move, protect; protect, move, hit; move, protect, hit; and so on) and they must have the proper supporting systems (communications. intelligence, training, logistics, etc.) and apply the timeless principles of war (unity of command, mass, economy of force, etc.).  But in the end, warfare remains the ability to hit, move, and protect.

So, for those of you who thought Plebe boxing was just a physical torment to add to the tribulations of our first year at West Point, it was really a deep academic subject full of profundities that we could call upon in our future years as we dealt with the many challenges that the Army introduced us to.  It was a truism I kept from everyone else during the effort, of course, but now you know the rest of the story. 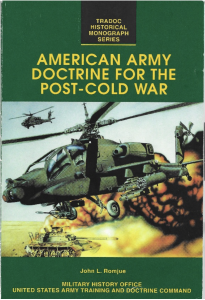 Editor’s note:  For those who would like to know more, you may go here; click on the cover photo to read more:  https://www.google.com/books/edition/American_Army_Doctrine_for_the_Post_Cold/qXKyv6Q2Dl8C?hl=en&gbpv=1&pg=PP1&printsec=frontcover