Along with only two other American wives, I was living in Ui Jong Bu, Korea, while my husband was on an unaccompanied assignment in the Second Infantry Division. I had been in country since June 1973. 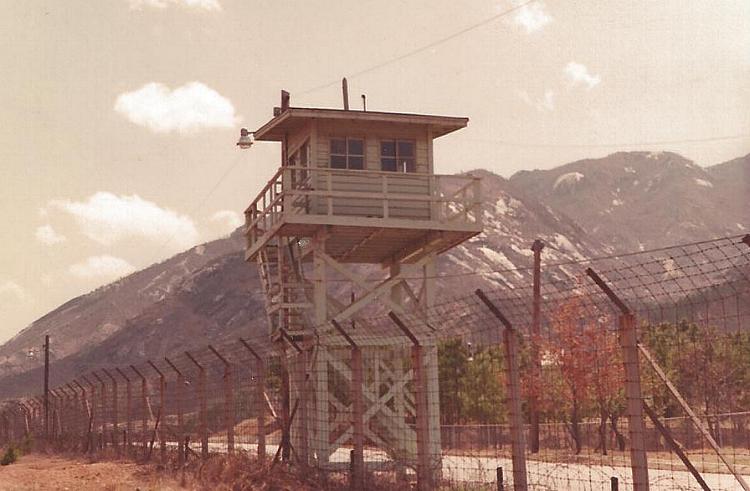 The soldiers of the Second Infantry Division were located at many camps near the Demilitarized Zone (DMZ) and spent their time training, whether in their permanent camp (for Bill’s Battery and most of the rest of the Second Division Artillery – Camp Stanley) or at an outpost in or nearer the DMZ – Camp Stanley was only 15 miles from the DMZ. There was a schedule, so they knew when they would go and how long they would stay at their outpost. As the Coordinator of the St. Louis High School Program at Camp Stanley, I was kept aware of when certain units would be out in the field, so that those soldiers would be given an excused absence from their classes.

On October 6, 1973, without warning, all soldiers stationed at Camp Stanley disappeared. This was most unusual. When the teachers for St. Louis High School classes arrived to work that day, we were all surprised that there was no one there – well, only the Korean nationals who worked in the snack bar or other jobs around post. None of us could figure out what had happened to everyone.

We did not start to worry for the first 24 hours, but when their disappearance lasted longer, concern set in. Since we were not authorized to be there, it was not clear to us what we should do. Had another Korea War started? Where should we go? Since we would definitely stand out among the Korea population, as foreigners, at least, but probably also as Americans, we were puzzled about how to hide in plain sight. Our naïve answer was to get to the nearest river, hug the river bank and walk as far south as we could as quickly as possible, avoiding population centers. The river would surely take us away from danger. What we would do when we reached the ocean was not clear or how many days would it take. At least the weather was still warm, so we could survive outside, at least for some weeks. Surely whatever was going on would be over by then. We just knew that we should not stay so close to the DMZ. Having been a part of a Girl Scout troop that often lived primitively, I believed that we could survive using our hastily conceived plan.

As we were preparing our escape, the soldiers of Camp Stanley reappeared, slowly returning. What had happened to send them away, without warning, in the middle of the night? The entire U.S. Army worldwide had been placed on alert because of a surprise attack on Israel by Egyptian and Syrian forces. On Yom Kippur, the holiest day in Judaism and which that year occurred during the Muslim holy month of Ramadan, the Arab coalition of Egyptian and Syrian forces jointly attacked into the Israeli-occupied territories, entering the Sinai Peninsula and the Golan Heights which had been captured by Israel in the 1967 Six Day War. Both the U.S. and Russia, in the midst of the Cold War, began a gigantic resupply effort to their own allies; this almost led to a confrontation between the two nuclear superpowers.

All of this was unclear to the three American wives living within 15 miles of North Korea. Only after Camp Stanley was back to normal did the story come into focus as to where the soldiers had been and what they were doing. It was a scary few days for us. Luckily, we did not have to put our plan to use!