In 1961 when most of the West Point Class of 1969 were enjoying their first heady experiences of high school, construction began on a wall that would split Berlin into two distinct and isolated sectors.  This event, emblematic of the greater divide between Communist Europe and the free West, was probably little noticed by those teenagers, but it had huge implications in the way they would come to see the world and serve their country over the next thirty plus years. 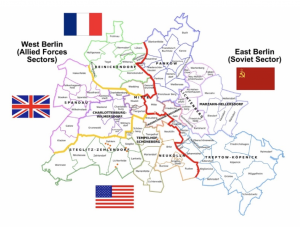 By 1961, more than 3.5 million East Germans (about 20% of their population) had fled communist occupation for freedom in the West, frequently exiting through Berlin.  The Soviets and East Germany, fearing the exodus would only get worse, began a second blockade of the city, dividing Berlin into two cities.  This time they succeeded.

Construction of a barrier began on 13 August 1961, sealing off West Berlin into a virtual island within Soviet controlled East Germany.  Consisting of concrete walls, barbed wire, guard dogs, bunkers, guard towers with machine guns and a death strip or no-mans-land of anti-vehicle trenches, this impenetrable Wall dramatically symbolized the “Iron Curtain” that separated East Germany and other Soviet bloc countries from the West.

Over the next 28 years, approximately 5,000 citizens of East Berlin managed to escape and at least 140 were killed attempting to gain freedom.  Then, on 9 November 1989, when East German authorities, through an extraordinary confluence of events, announced that it would allow limited visits to West Berlin, masses descended on the Wall, breaching the barrier.  On 22 December 1989, the Brandenburg Gate was opened.  Official demolition of the Wall began on 13 June 1990 and finally ended on 3 October 1992.

“It was the worst of times.”  Vietnam was winding down and the Army in Europe was suffering morale and serious drug problems when I arrived fresh from a combat tour in Vietnam for a three-year assignment at Herzo Base, Headquarters of 210th Field Artillery Group, outside the town of Herzogenaurach, West Germany.  In 1973, while commanding C Battery, 1st Battalion, 33d Field Artillery (a nuclear-capable Honest John Rocket firing battery) I decided to give my troops a hands-on lesson to explain why we were in Germany and to see the face of our adversary, up close and personal.  I knew there was no better place for troops to learn that lesson than Berlin, the epicenter of the Cold War.  Having gained command approval for this “adventure training” and receiving official transportation orders, I gathered a group of soldiers and wives for a memorable trip … and my first view of Berlin.

During that time in order for active duty soldiers to travel to Berlin, special military travel authorization had to be issued by the US Army Europe Headquarters, translated in Russian and French.  These “Flag Orders” (so called by the US flag header atop the orders – see inset, below) remained in our personal possession throughout our visit and were carefully checked by East German guards.  With these orders in hand, we boarded the “Duty Train” at the Frankfurt Bahnhof (main train station) on 5 October 1973 late in the evening and traveled in darkness (as required by Communist authorities) through East Germany to West Berlin, arriving early morning on 6 October.  We travelled with shades drawn at all windows and as we crossed into East Germany, the train stopped for our orders and ID cards to be checked.  Although we each were assigned old-fashioned, private couchettes with bunk beds, no one fully relaxed, or, in my wife Sally’s case, changed out of street clothes. 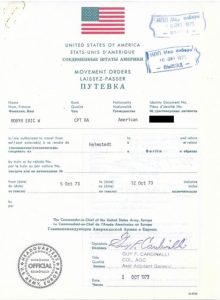 On arrival in West Berlin, we checked into military lodging and began touring a vibrant city, whose citizens hustled energetically along busy streets to offices, restaurants, and homes brightly lit at night in stark contrast to her surrounding neighbors in East Berlin shrouded in darkness.  Our first view of the famous Brandenburg Gate, blocked by the ugly Wall, was one I never forgot.  For me, it embodied the hatred and fear of malignant Communist tyranny determined to oppress its people and to spread its cancer across the globe.  I was proud then, as now, to be an American soldier dedicated to preserving the freedoms of the West and protecting those in need.

One highlight of the trip for all was a visit to Checkpoint Charlie, the best-known official crossing point between West and East Berlin.  From the wooden observation platform, my troops and I looked directly across the Wall and the “death strip” into the eyes of East German guards in a gun tower with orders to shoot anyone attempting to flee East Berlin.  It was a sobering experience.

One evening, Sally and I traveled from the American Sector to the French Sector for a special dinner at the French Officers’ Club.  After a wonderful meal with the time now past 11 pm, we walked to the nearest UBahn (subway) station and hopped aboard the first train heading back to the American sector and our temporary lodging.  Little did we know that we would find ourselves traveling through the bowels of East Berlin making 2 underground stops, where Grenztruppen (East German Border Guards) stood watch armed with the East German version of the AK-47.  Darkened, littered and unwelcoming, the East German stations allowed passengers to leave the train, but no one got on.  With a Top-Secret clearance, nuclear duty assignment, and my GI haircut, Sally sat holding her breath and I sat slumping in the seat hoping not to draw undue attention!  Fortunately, our brief and unauthorized excursion into communist territory ended without drama and we once again entered the brightly lit, clean, and vibrant West Berlin station in the American sector.

Although tourists could and did visit East Berlin, American military personnel with security clearances were not authorized to do so.

Interestingly, in 1984 on a second assignment to Europe, I did once again visit East Berlin while Aide to the SACEUR (Supreme Allied Commander of Europe) General Bernard Rogers (USMA Class of June 1943) – this time in an official status.  General Rogers, along with a group of distinguished visitors and wives, was being given a VIP tour.  Our guide proudly drove us through the city, many areas still in ruins from WWII bombing, and pointed out their officer housing area, reminiscent of inner-city subsidized housing with over-grown grass, trash, and windows partially covered with sheets or blankets.  We were escorted into a Zeiss Optics store, where “shopping” consisted of standing at a counter and asking a clerk to retrieve the item you wanted.  She would retrieve it for you to see, but not handle.

As we crossed a major city street, I will never forget the discordant racket and dense exhaust smoke of traffic, consisting mainly of Trabants, the flimsy East German car with a 2-cycle engine, once described by a well-known automotive journalist as “loud, slow, poorly designed, and badly built.”  This automotive gem, I learned, was available to East-Bloc customers after waiting only 13 years to buy their own car.

When in West Berlin with General Rogers, we stayed at the beautiful “Wannseehaus” which had been the site of the infamous Wannsee Conference held in January 1942 (where Nazi high officials met to decide and coordinate plans for Hitler’s “Final Solution”).  After the war its reputation was somewhat redeemed as an Allied war reparation asset, and later as a museum to the Holocaust.

One evening while there, the SACEUR hosted a dinner party for various dignitaries, which included the Swedish Ambassador to East Berlin.  The ambassador obviously enjoyed his posting and regaled us with stories of the lifestyle of Communist party officials entertaining him and other dignitaries.  It was quite busy, he said, with frequent lavish dinner parties, featuring the choicest foods and finest wines, cruises, and social events.  When asked how these luxuries were available in East Germany, he laughed and said the Communist officials sent a truck daily to West Berlin to stock up at the KaDeWe, the city’s enormous department/grocery store, second only to Harrods in London.  For all of the deprivations of the average East German citizen, Communist officials lived the life of luxury, all enabled by the bounty of the West.  As the old saying goes, some Communist comrades were “more equal than others!”