One of the few opportunities we new cadets had to choose among options during Beast Barracks, the first grueling weeks at West Point, was the foreign language preference form we all filled out. West Point then taught five foreign languages, and we were required to master one of them during our plebe (freshman) and yearling (sophomore) years. Each of us received a simple form listing the five languages – French, German, Portuguese, Russian, Spanish – and were told to number our top choices, 1 thru 4. I picked German #1, since I expected to be stationed in Germany, and then puzzled over how to select the rest. I could see no value at all in Portuguese – Putting down a revolution in Brazil? Seemed unlikely – and French and Spanish seemed equally useless (I had not yet discovered French food, and Spanish was not yet widely spoken in the US). So I put my #2 beside Russian, by default. Heck, I thought, it might prove useful in a POW camp, if things in United States Army Europe (USAREUR) were to go really badly. I think I made Spanish my #3 and French #4. I assumed I’d get German, and didn’t think much more about it.

When we got our course assignments for the Fall semester, Surprise! – Russian! I had studied Latin in high school, and had no idea what Russian would be like. Suffice to say I found it challenging, the hardest course I took in four years, other than Advanced Calculus and Golf. I learned later, much later, that the word had gone out prior to the language signup to NOT select Russian as one of the top four choices, because it was the most difficult by far, and the Language Department had problems filling the course slots. I hadn’t gotten the word.

Fast forward to November, 1991. Fortunately, there had been no POW experience to draw on my Russian, and I had not spoken a word of it since the last exam of yearling year. I’m working for a cellular phone company whose sister company is putting up a cellular network in Moscow, USSR, and they need some temporary help. Since I speak Russian, would I be interested in going to Moscow for 90 days to help train up the new Russian staff? Well, I say, it’s not accurate to say that I SPEAK Russian, only that I once studied (struggled with!) it, about 25 years ago. No matter, you’re the closest thing we have to a Russian speaker, and you’ve got the right functional skills, so off you go.

A couple days later I stepped off the plane into the Moscow winter. In the subsequent couple months, I did a lot of teaching, but more learning. My Russian language came back gradually, though the young adults I worked with spoke excellent English. Virtually everything about the Union of Soviet Socialist Republics (USSR) was different from its analog in the US.

At this time, there was only one hotel in Moscow up to “western standards,” and that was where any foreigners of any importance stayed. It was also where the phone company put me up. Every morning the large lobby would fill up with all these guests, awaiting their rides. You’d meet some interesting and unlikely people. One morning a well-dressed American exec introduced himself to me and we chatted while we waited. He was a recently retired U.S. Air Force three-star General, who had taken a job with an American technology company and was calling on some Soviet ministry. He showed interest in our work, putting up the first cellular network anywhere in the USSR, and wished me luck. I asked him what he had done on active duty. He had most recently headed the Defense Intelligence Agency. Well, I said, maybe you can share some insight on something I’ve been wondering about. In the couple weeks I’ve been here, I’ve walked around town a lot, and I’m amazed at the run-down condition of just about everything other than the Kremlin and this hotel, and at the emptiness of the few retail stores that seem to be open. And this is the CAPITAL CITY! I can’t help wonder how things are out in the provinces. “Right,” he says, “This whole place is in sad shape. Always has been.” So, sir, my question is this: We Americans have heard forever that the USSR is a huge threat, militarily and economically. Maybe, they’re pouring everything they’ve got into their military, but their economy is obviously on its knees, to my great surprise. I can think of only two ways that we could have gotten such incorrect information. One is that our intelligence agencies somehow just missed this obviously crumbling economy. The other is that they knew about it, and lied to us. I can’t help wonder which it was. He looked at me silently for a moment, and then excused himself.

We closed the Moscow office for Christmas on 22 December, 1991, and we foreigners all went home. I returned to Moscow on 10 January, 1992, after Russian Christmas on 6 January. When I had left, a huge Soviet flag, the hammer and sickle on a red field, had flown over the Kremlin, and smaller ones of course flew all over town. This was the flag we of ’69 had prepared to defend Western Europe and our own country against, and many of us had expected to meet them in combat on the plains of Central Europe. When I returned to Moscow, the Soviet flag had disappeared everywhere, replaced by the tricolor flag of the Russian Republic. Our nemesis had disappeared, evaporated, gone, without a shot fired, and had been replaced by an entirely new-to-us country. It was eerie. And serene. And a wonderful outcome to a Cold War that could have gone much worse for us and for the world. 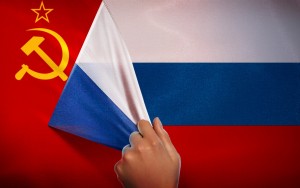 Transition: U.S.S.R. to Russia     This 90-day cellular project ultimately morphed into an 18-month project with cellular systems not only in Moscow, but also in 11 other Russian cities. I got to visit most of them. Three – Vladivostok, Nizhny Novgorod (Gorky during the USSR), and Samara (Kubyshev during USSR) – had been “closed cities,” meaning that Soviets had needed special clearance to visit them, and visits by foreigners had been strictly forbidden. When they became part of Russia in January 1992, they were no longer closed. The timing of all this was such that in Samara and Vladivostok, my American delegation was among the very early foreign visitors, and possibly the first Americans to visit these cities. It was very cool, and felt important to be involved in opening these doors. Somewhat to my surprise, we were warmly welcomed wherever we went, with no trace of Cold War antipathy. I asked my closest Russian friend how this could be, after decades of mutually assured destruction, and he responded that the Russian people and the American people had shared a common enemy for many years, and now were at last together. I didn’t get his point, and asked whom he meant as our common enemy. His answer: The Communist Party of the Soviet Union. Oh, of course.

All this from having picked Russian as my #2 choice during Beast Barracks!