He hadn’t imagined going home this way. The cargo plane had two rows of bunks to accommodate the wounded, stacked side by side down its center and bolted to the floor. Racks of double bunks also lined the port and starboard bulkheads. Every bunk had a wounded soldier, or sailor or airman strapped into it on takeoff.

Nurses and corpsmen dressed in BDU’s moved from bunk to bunk administering medication, passing out bottles of water and sandwiches and offering words of encouragement. “You’ll be home soon.”

It was a long, long flight to Washington, DC. The plane would stop only once for refueling in Elmendorf Air Force Base in Alaska on the journey. Many bed pans and colostomy bags would need empting. 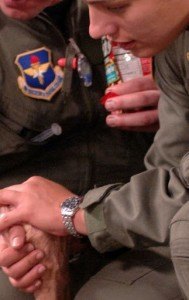 He was a twenty-two year old second lieutenant and among the lucky ones assigned to the upper bunks because they could climb up and down on their own. Some in upper bunks lacked an arm or hand. He was among the especially lucky who were still whole.

With barely more than a month in country, an explosion had ended his tour. He hadn’t been wearing body armor, none of them had. My fault. I was in charge. It was so damn hot. Even so, I should have insisted.

No one else blamed him. They gave him a frigging medal, a purple heart, his wrong-place-at-the-wrong-time medal. Guilt was a constant companion.

Sufficiently far from the blast to survive, he sustained wounds from many pieces of shrapnel. Two punctured his left lung, two tore meat from his right shoulder, another tore meat from his left, another collapsed veins in his groin, smaller pieces peppered his body. His wounds had to be minor compared to those of his men who were closer.

He wondered what had happened to Swartz and Mendoza. It had been over a month and a half and no one had been able to tell him what had happened. Maybe they don’t want me to know. He felt guilty that he did not know, that he was going home without knowing, that he was going home at all. His body still needed rehabilitation, but he wasn’t like these others, truly disabled.

The novel propped on his chest was a gift from a helicopter pilot who had left on an earlier flight. The pilot had lost a hand and was worried how the loss would affect his wife, and how he would provide for his family, now that flying helicopters was out of the question. The pilot wasn’t whole and he still was. It was a simple as that. So why did he feel guilty even being grateful that he was whole? Did his gratitude suggest that the pilot, and all these men who had lost limbs, were something less? He really didn’t want to see it that way.

The nurse in his section of the plane was a first lieutenant, which meant she was probably older than he. She cropped her wavy blond hair above shoulder length, and wore no makeup. Baggy BDU’s cloaked what looked to be a great figure. The way she moved, her strength and grace and balance, suggested it was. He wanted it to be. Her mane framed a high forehead, wide cheekbones and bright blue eyes. A too-wide mouth, square jaw and a scattering of freckles made her more girl-next-door than model-beautiful, but more attractive for it.

Moving from bunk to bunk in his line of sight, the nurse distracted him from reading. With a touch here and word there, she gave solace to men who hadn’t seen a woman like her in quite some time. He hadn’t seen a woman like her in a long time. Those who were well enough hung on her words and basked in her smiles. Those who were not demanded most of her time.

When she passed, sometimes she would smile and ask how he was. Her name tag read M. Sommerville. He kept the exchanges short, even though he desperately wanted her attention too. The others needed her much more. M might stand for Mary. His mother’s name was Mary.

Walter Reed Army Hospital waited for him. He was healthy enough that he would probably complete his rehab as an outpatient. That meant time with his family, and a chance to connect with old friends before going back on duty. Will the wounds affect my next assignment? At least I can count on having a next assignment. The ceaseless drone of the engines lulled him to sleep.

He woke needing to pee. Climbing down from the bunk made his chest ache where the doctor had done emergency surgery under a local anesthetic to slip a vacuum tube between his ribs, drain the blood and reinflate his lung. He walked along the steel floor to join a line waiting to use the head. Bags of urine hanging off the sides of bunks of catheterized troops made him doubly grateful to be ambulatory. On the way back, he met her.

“I see you are up. How are you feeling?” she said.

“Good.” He lowered his voice. “Next to the rest of these guys, I’m doing great. You’re wonderful with them.”

Her smile lit the dark interior of the plane like a ray of sunshine. “Where are you from?” she asked.

Is she flirting with me?

“I’m from Alexandia, Virginia. When we hit the ground, I’m almost home. Where are you from?”

She’s even prettier when she smiles.

“I grew up an army brat, but right now, I’m from San Diego.”

Just then, one of the more seriously wounded men down the aisle moaned and asked for more medication. “I’ve got to go,” she said.

He went back to his bunk, climbed in and finally got into the novel the pilot had given him. When she would pass, she smiled and sometimes pause to chat.

We had a moment there. Didn’t we?

He let his mind drift over the events of the past year. Graduation leave, Officer’s Basic School at Ft. Sill, Jump School, Ranger School. Ft. Sill hadn’t been all studies. There had been wild parties, weekend football games in Dallas and U of O, dances at the O’ Club and beautiful women. Time at Ft. Benning managed to produce its own series of escapades. Life had been a blur. He had lit the candle at both ends and didn’t care. He lived like there might not be a tomorrow. As it turned out, there damn near hadn’t been.

He watched the nurse, ministering to the troops, smiling and sharing words as she passed. He soaked in the essence of the woman. Generous. Giving.

There’s no chance, but I’m losing a piece of my heart here.

Dragging a notepad from his duffel, he scribbled down what he was feeling.

On the ground, after the plane had taxied to the terminal, while preparing to disembark, he had a chance to speak with her one last time. “What does M stand for?”

“Your name tag says your first initial is M. I wondered what M stood for?”

“Oh. It’s not my name tag. My uniforms weren’t clean and I borrowed this from a friend. My name is Nancy.”

He quickly scribbled something on the notepad, tore out a page and gave it to her. “I’d like you to have this.”

He shouldered his duffel and moved down the corridor towards the exit. He glanced back and waved. She held the paper in one hand and waved goodbye with her other, and turned to read. 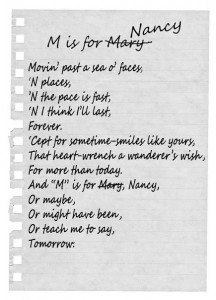 An Actual Event in Fictional Form