As an Eagle Scout himself, Bill found a good fit for some of his time – bringing his patriotism and leadership skills to Boy Scout Troop 279 in Peachtree City, GA. He was a Troop Committee member, representative 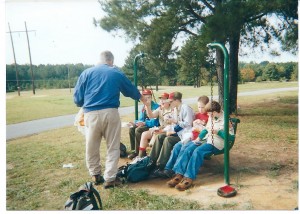 unty  Fair each year among other things. The most obvious connection to his USMA and military life was his effort to teach the Scouts how to do flag ceremonies properly. Before each Eagle Scout ceremony (There were many Eagle Scout award earned by this particular troop.), he met with the younger Scouts participating in the flag ceremony and taught them care and respect for our nation’s flag.

One year, the Troop committee decided to accept 30 new Webelos Scouts (into a troop of only 30 other Scouts), Seeing some problems with integrating so many new, young and inexperienced Scouts, Bill offered to create a new program that he called the Tenderfoot Trail. This was to fill half of every weekly meeting when older Scouts would lead and teach the basics of Boy Scouting to small groups of new Scouts. (Double benefit – the older Scouts had to know the material before they could teach it!) During the Tenderfoot Trai 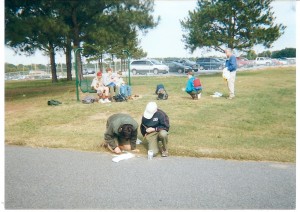 suspected, the new Scouts (age 10-11 years old) were hard to keep going in the same direction. One boy in particular was very difficult and it soon became clear that an adult had to be by his side no matter what the assignment was for that week. Each week, no one thought this boy would come back to the troop for the next week’s meeting, but, happily, he continued to come and, eventually, mastered all the new Boy Scout skills.

It was only at Bill’s funeral that the depth of his influence on the Scouts became clear. The unruly young Scout had grown and it was he and his mother that suggested to the parish office (This was a surprise to Bill’s family.) that there needed to be a Boy Scout Color Guard to accompany Bill’s casket 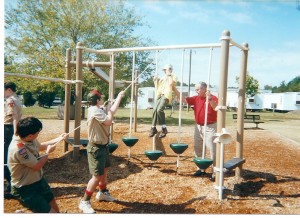 into the Church. It was that same unruly Scout who was the first to volunteer to participate. They say that there was a great competition among troop members for who would actually get to carry the colors and participate in the ceremony. It was a touching experience to see the older and now no longer unruly Scout leading the Color Guard, bearing the colors of our nation as we entered the Church. It was heartwarming to each of us to see how Bill had influenced these young Scouts and how they wanted to salute his life. Adding to that, the once young, unruly Scout kept coming back to Scout meetings and eventually became an Eagle Scout himself. What a joy for all!