I have always looked upon our moves, courtesy of the U.S. Army, as great adventures – opportunities, really, to see the world on someone else’s nickel. I never dreamed, growing up in a very small town with one, four-way stop sign, that I would live in three foreign countries and nine different states. Former lessons in geography, history and social studies came alive when I experienced everyday life in regions of the world as charming as Europe, as exotic as the Middle East, and as down to earth as Texas. No longer could the people depicted in my old textbooks be classified as “typical”. Their authenticism literally jumped from the

pages into my new world-view, animated by their customs, dress, languages, music and cuisines. Observing young girls in the colorful dirndls of Munich, shopping amidst the black abaya-clad women of Riyadh, line dancing with the boot-scoot’n cowboys 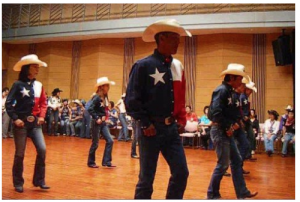 Line Dancers in Texasof Killeen, my hazy preconceived perceptions gave way to new realities. Yet, for all of the differences I encountered, the discovered similarities were even more revealing. In Kuwait City we lived “on the economy” as opposed to residing at an American compound. Our neighbors were just as curious about us as we were about them. During the first month in our new home on Block two, Street three, Jada five, House eight in Yarmouk, Kuwait City, Kuwait, our next-door neighbors knocked on our door every afternoon for thirty days. Their generous gifts included everything from a newly slaughtered leg of lamb, complete with hoof and hair, to a tower of baklava desserts, mountains of hummus, tabbouleh, baba ghanoush and falafel.

Traditional good ‘ol Southern hospitality was alive and well in the Middle East, or at least that is what we thought. It turns out we arrived on the first day of the holy month of Ramadan. During this time, Muslims offer gifts to their less-fortunate neighbors, who, in this case, just happened to be us! That was just the beginning of many opportunities we were given to share in the rich Kuwaiti culture and their time-honored traditions. Some of the highlights included an invitation to several Arab weddings, falcon hunts, camel rides, diwaniya’s (a reception area in which

Kuwaiti men could, from time immemorial, meet colleagues and guests), and visits to Arabian horse farms. In return I was happy to share our traditional American holidays with our international hosts. I prepared a Thanksgiving Dinner about once a month for different groups of Kuwaitis and homesick American soldiers.

The stories shared at the dining room table never failed to reveal the really important themes in our surprisingly similar lives: family, friends, and faith.
The family who lived directly across the street became our window into the life of a typical Kuwaiti family. This remarkable family of six had four children similar in age to ours. And, as often happens in our own neighborhoods, we became close friends through their activities. We soon realized that the family unit in Kuwait is a revered social entity. The father and mother took parenting very seriously. When the girls walked across the street to visit, one of the parents always accompanied them to the door to learn which movie we might be planning to watch. They were concerned with the country’s quality of education, the effect of outside influences on their children, and the importance of a moral foundation in their lives.
In the military, we expect a lot from our children and we hold them to very high standards. When your parent is in a command position, such as a First Sergeant, Command Sergeant Major, or a Regimental Commander, everyone knows who your Dad or Mom are, and everyone is watching you like a hawk. This kind of scrutiny is magnified even more when living in a foreign country. In 1994, after Desert Storm, Saddam Hussein once again assembled his army within two miles of the Kuwaiti border. The U.S. State Department organized a three-day window in which all family members could be evacuated out of the country. We had long discussions with our children on the importance of their reactions to the inevitable questions by their schoolmates during this tense period. I believe they clearly understood the significance of answering carefully and diplomatically to the inquiries of their friends and teachers. So for three mornings in a row, I received calls from friends and neighbors wondering whether we planned on sending our children to school that day or if we were packing our suitcases to leave the country. The sight of our eleven and thirteen-year-olds standing outside, waiting for the school bus, created a remarkably reassuring effect on everyone in our neighborhood. Fortunately, Saddam retreated and we all breathed a sigh of relief.

The nomadic way of life became quite routine for our family. Nearly every summer, when the children were young, our parents would gather up their grandchildren to spend two weeks on the farm in Ohio and two weeks in the big city of Cleveland. This “vacation” allowed me to organize our household goods in preparation for the arrival of the next set of packers and movers. Broken toys, outgrown clothes, and all extraneous objects were once again sorted, distributed or disposed of in short order. Curtains came down to be laundered. Carpets were shampooed and rolled up. Blankets and bedspreads were washed, folded and packed into clearly marked boxes. Every file was purged of outdated paperwork. Each knick-knack and doo-dad was carefully considered as to its relevance in our next set of military quarters. I like to think that this very thorough spring-cleaning was due to my fastidious nature, but in truth it had much more to do with the Army’s allocated weight allowance for shipping household goods. Every ounce over the specified poundage was a penny out of our pocket.

Frequent mobility created two major challenges for Army families: the availability of employment and career advancement for the spouses, and the transition issues facing military children as they relocated to different schools throughout their academic careers. During my years associated with the military, the two most transportable careers were nursing and teaching. However, the certification process in each state was so time-consuming and expensive that it often was not pursued. I believe, for my family, it was far more important for me to create a stable home environment, as quickly as possible, during the relatively few months we spent at each duty assignment. I became part of a strong Sisterhood of wives who chose to be stay-at-home moms. Despite the loss of income and opportunities for professional development, many of my fellow Army wives felt fortunate to have the time to participate in numerous volunteer opportunities, allowing us to utilize our talents, experience and education for the benefit of both our military and civilian communities.

The second set of challenges continues to be the unique transition issues facing our military children as they relocate throughout their academic careers. There are numerous emotional, social, and academic issues which need immediate attention with every single move to a different post: special testing for children who are Gifted and Talented, meetings with counselors and psychologists to develop updated Individualized Education Plans for the learning disabled, searching for yet another set of music, dance, and/or karate teachers, and youth athletic teams. Undoubtedly, the most frustrating exercise for me was trying to enroll our children in a Catholic or a private school, if there were any, near our Army posts. Often times the military is not able to issue relocation orders in a timely manner and it was not unusual to be told of our next duty location with less than four months’ notice. Our children and I had to reinvent ourselves at each new school and with every new job. Navigating the unchartered waters of unfamiliar classmates, foreign cultures, and even the unique clothing styles in a particular geographic region, required an inordinate amount of attention to detail.

I believe our children were very fortunate to be the recipients of this unofficial “study abroad” program, from the moment of their births until they left for college. Was this way of life difficult? Sometimes. Did our children like leaving their friends every year or so? Not at all. Did they prosper in their worldview, advance in their academics, becoming strong and resilient adults? I’d like to think so. Despite all the challenges and complicating issues we faced with each unique assignment, I tried to nurture a positive mindset through it all. And so our treks across the country from West Point to Ft. Bliss, Ft. McPherson to Ft. Leavenworth, or across the ocean to Europe and the Middle East, became opportunities for family adventures. Our four children, for several months at a time, had only each other as their known friends and so they learned to support and encourage each other through their numerous transitions. Today, I am happy to report, they remain the best of friends and call and text each other whenever they need some advice or a shoulder to cry on.

I consider myself fortunate that during our 30 years in the military together I never had to experience the fear and anxiety faced by so many spouses, of a deployment to a war zone. As a mother, however, three of our four children were deployed to Iraq for a total of four tours of duty in that country. All I can say is, thank goodness for Skype! It was so reassuring to be able to see their faces and hear their voices once a month! My daughter-in-law in particular deserves bouquets of accolades for the positive way she handled raising my three grandchildren as a single mother for fifteen long months while our oldest son was deployed. I believe she stepped up to the plate in ways she never knew she was capable of, never knew she had the strength, never knew she had the courage. She is very indicative of today’s typical military spouse. They have learned to manage stress and build resilience in themselves and in their children.
People often ask me if I would choose the military life, if I had it to do all over again. My answer is always the same, “Absolutely! Positively! Without a doubt!”
And, oh by the way, after residing in my current home for the past twelve years, I really need to clean out my closets.

Some of Marianne and Bob’s homes in the USA 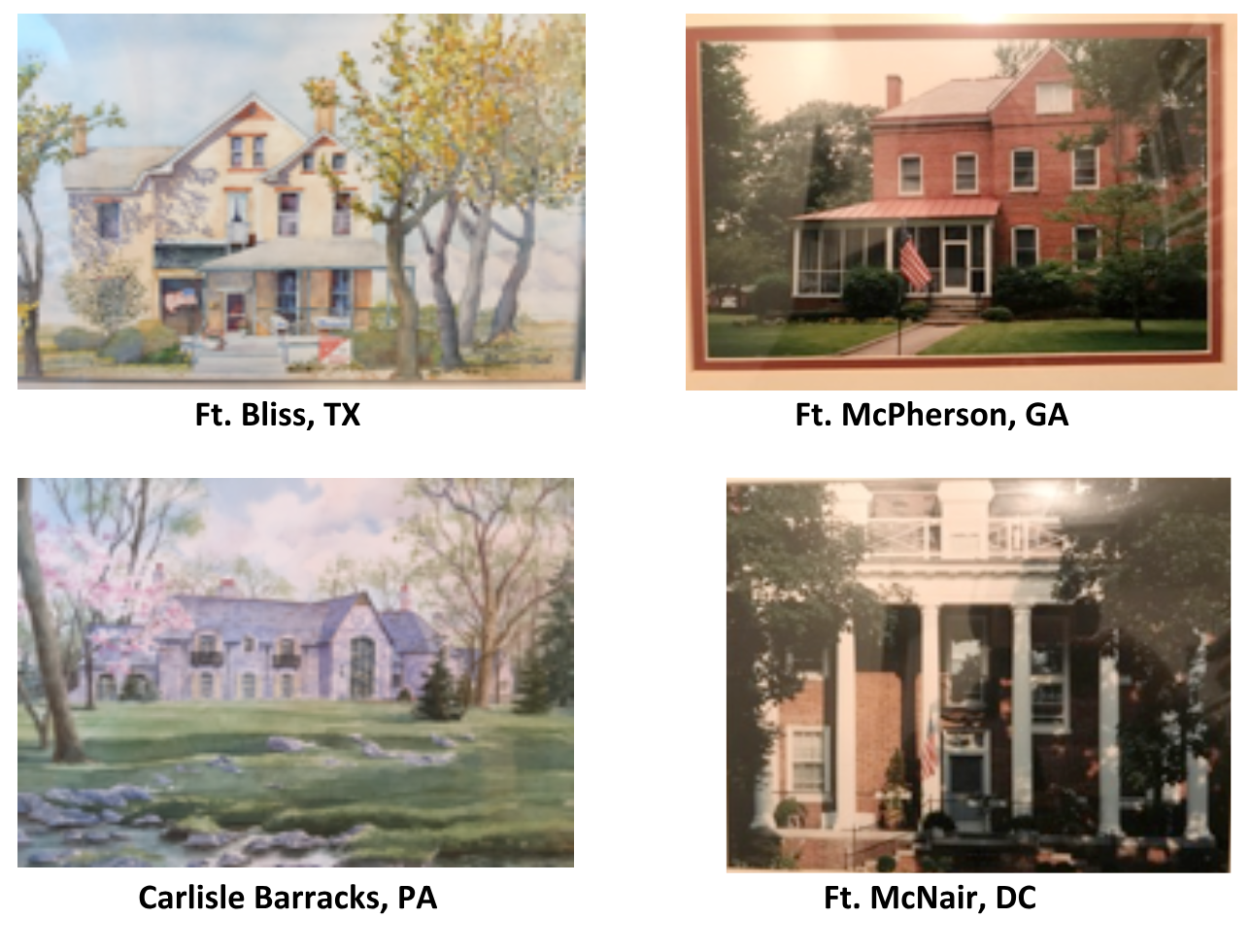