I was rummaging through a box of stuff recently and came across a photograph of myself dating back to my high school days. Looking at my young self-50+ years later got me to thinking … how did I go from that 17-year-old kid to a 71-year-old retired pastor with 30+ years of ministry experience? Or, how did I go from “Cross Rifles” on my lapels to “The Cross”?

That probably seems like a relatively easy question to answer since like my other stories it simply calls for a recitation of the historical events that led from one thing to another. But truth be told it is not nearly as simple as that. For how does one explain in any meaningful way how one gets changed from the inside out … and where do you begin telling the story?

I think that from a very young age God and I had always been playing a game of hide and seek. When I was hiding from Him He would be seeking me … and when I was seeking Him He was nowhere to be found. Not because He wasn’t there, but because I was looking in all the wrong places. But as I said in one of my other stories, God has been truly good to me right from the start.

I point to two people as being the most influential in pointing me to a lasting faith in Christ. The first was my roommate during our Firstie year, and the second was my wife. From my roommate I got to watch someone live out his faith in real everyday human terms for nine full months. He gave me reason to believe that there might be something real to this idea of being “born again”. And from my girlfriend and eventual wife I had a reason to continue playing hide and seek until I finally ended up looking in the right place. Once I met Avril I knew I did not want to lose her and I knew I wanted what she had so that we two could truly become one.

The most poignant thing that I remember about things relating to God growing up was the gnawing question, “What’s going to happen to me when I die?” That and the fact that I did not think I was going to fare very well when the time came to find out. I grew up attending church very routinely, but even that did not do anything lasting to help alleviate my uncertainty. So, as I grew up, I measured everything I learned about God and religion to how close it came to giving me a final answer to the big question. My roommate was one of the first people I ever remember meeting who could sincerely answer that question for himself … and Avril was another. I watched him closely…and I became more and more convinced that Avril was a keeper.

So, just as my interest in all things Russia were systematically imprinted on my life as time went by, so too were things about God and the big chill imprinted on me as well. After West Point and marriage to Avril, the next place that imprinting happened was in Berlin. Soon after Avril arrived she met another Army wife who asked her if we would like to attend a home Bible study at their apartment. It was taught by an older American missionary couple and after dipping our toes in the water Avril and I made it a regular habit during our time in Berlin. Nothing permanent happened with regards to an answer to the question, but it was certainly something that the Lord used to keep nudging me forward.

My time in Vietnam was another period of significant imprinting. I would imagine that the question, “What’s going to happen to me when I die?” is one that a lot of people ask in such circumstances. It certainly was in mine. That and the fact that I simply ran into an unending stream of people who all seemed to have the same kind of sincere answer to the question for themselves that I had originally found with my roommate and Avril. It’s the one that Jesus so succinctly makes in the Gospel of John, chapter 3, verse 7, “You must be born again.” Even so, as with Berlin, nothing permanent happened with regards to an answer to the question during my time in Vietnam.

Finding the answer for myself didn’t happen until after I got back to the United States and into my assignment with the 5th Special Forces Group at Fort Bragg, North Carolina. Soon after arriving there I was sent as a liaison officer to work in the Tactical Operations Center of a Joint Army, Navy, Air Force and Marines Task Force. I will never forget what happened. I was in the middle of a late-night shift in the TOC, and a big, impressive African-American Army chaplain came walking through with a pile of books in his arms up to his chin. He asked me if I would like something to read and I said sure. With that he handed me a book from his pile and kept on walking.

The book he gave me was “The Cross and the Switchblade” by Rev. David Wilkerson. I read the book off and on as I had time until my shift was over and then I went back to my tent to finish it. As soon as I closed the book I realized that I could no longer avoid the obvious … I must be born again. So, I began to pray. For the first time in my life I prayed as if God were real and I really wanted to talk to Him and I really wanted to hear from Him. I prayed all kinds of stuff. I remember saying something like knowing I had messed up my life and I was a sinner and wanted to know I was forgiven. At one point I even prayed through the Apostle’s Creed confessing that I believed all those things it says. All I know is that somehow, somewhere in the middle of my prayer, I sensed the great burden of my burning question that had been weighing me down for years was lifted. I felt clean and new and different … and I knew what was going to happen to me when I died. I was going to be with God forever. The day was Thursday, May 18, 1972.

All of this was part of the necessary process if God was eventually going to take me from “Crossed Rifles” to “The Cross”. 2 Corinthians, chapter 5, verse 17, which has been a favorite of mine for a long time now, says, “If anyone is in Christ, he is a new creation, the old things have passed away and all things have become new.” That’s the way I felt going forward. From the time I was 10 years old I had thought I was supposed to go to West Point and become a career officer in the Army. But now I thought differently. I didn’t know what I was supposed to do, but I felt deep inside it was something else. In due course I resigned my commission and Avril and I moved to White River Junction, Vermont, where we found teaching positions in the schools there. Avril taught high school choir and I taught 5th grade math. And, while we were searching for a home to buy, we also found a little Bible church which we started to attend.

In that Bible church we started to grow in our faith and in due course I found out what I was supposed to do with the rest of my life. God pointed me in the direction of seminary with the goal of eventually becoming a pastor. The brand-new pastor of Valley Bible Church (his first Sunday at the church was the first Sunday we walked in the door) had gone to Dallas Theological Seminary, so that’s where I ended up going. We arrived in Dallas in August of 1975, and four years later I left with a Master’s in Theology with a major in Bible Exposition.

I didn’t end up going straight into the ministry as I had originally imagined. We moved back to White River, Vermont, and I worked in business for six years. In due course, the Lord did lead us into ministry, though, when in 1985 I became pastor of Church of the Open Door in Hampden, Maine. A year later, when I heard that a Maine Army National Guard Engineer Battalion a couple of miles down the road needed a Chaplain, I interviewed for the position and was accepted.

A couple of years earlier while living in Vermont I had had my commission reinstated and had served there as an Infantry officer, so it was a relatively simple process to get a branch transfer from the “Crossed Rifles” of the Infantry to “The Cross” of the Chaplains Corps. 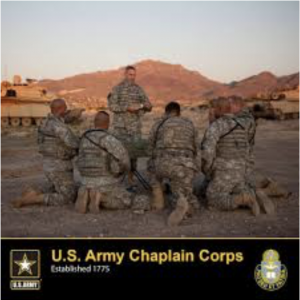