At Cam Ranh Bay we deplaned and were placed into the standard quarters in base camps.  They were plywood, metal sheet, and screen huts.  They were not very sturdy, but they did allow airflow and kept the rain off.

The officers were issued jungle fatigues and some gear.  I had orders to the 101st Airborne Division (Airmobile) in I Corps.  We had to wait local assignment however and I worried about being diverted.  The 101st was still in a combat mode and not in a “stand down” to return to CONUS (The Continental US).  The war was actually winding down for some US troops under Nixon.  The Cambodian invasion in the spring had really hurt the NVA in the south and the real action left seemed to be in I Corps up north near the North Vietnamese border and Laos.  I also had heard a rumor that some engineer officers with Ranger qualifications were being sent to infantry units as platoon leaders.  That was a concern – I had trained as an engineer and wanted to serve that way.  There was no problem and my orders to the 101st were cut as an engineer officer. 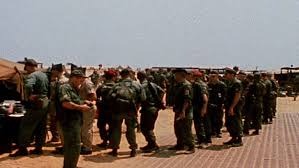 We had to use local “tailors” to sew on our unit patches, locals who were allowed to work on base.  The screaming eagles used the full color patch – not the subdued one.  This was a high ranking division decision to “strike fear” in the enemy.  We were the 101st!  The troops called it the “puking buzzard.”  But I do not know what the enemy called it.

This was my first contact with the Vietnamese people.  My initial thoughts were very “deep” — they were very thin and small, and very industrious.  Many spoke French (from the days of French Indo-China), but most spoke their own sing song language and a bit of pigeon English.

(For the most part we had little contact with the Vietnamese.  We often used what is considered a racial slur to describe the enemy Vietnamese, “gook”.  This was akin to “Jap” or “Kraut” to describe the enemy in WWII.  It supposedly had its origins in the Korean language for the term for another countryman.  A Korean might address American soldiers as “miguk”.  While the Viet Cong (South Vietnamese Communist insurgents) were referred to as “Charlie” from the phonetic alphabet term for C in the initials VC, we were up against the NVA in our war and rarely encountered VC.  My story will use “gook” as a derogatory term for the enemy from time to time as we widely used it then, which seems to me the more authentic way to present our attitude toward the enemy.  We had a real disgust for the enemy as they reportedly took no prisoners, terrorized and killed civilians who helped us, and often tried to wound and maim soldiers knowing we would not abandon our wounded – thus taking two out of the fight with one hit.  However, later in the war after close in battle, I grew to appreciate and respect the courage and dedication of their soldiers.) 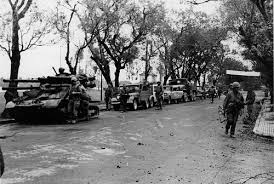 We boarded C-130s on the tarmac for our trip to Phu Bai airfield just south of Hue in I Corps.  Hue was the capital of the “middle kingdom” complete with ancient fortress on the Perfume River.  It had been the scene of bloody battles for the Marines with the Viet Cong and NVA during Tet 1968.  The 101st was based in the area now – a brigade HQ at Phu Bai, a brigade and Div HQ at Camp Eagle southwest of Hue, and a third brigade HQ at Camp Evans north of Hue.  The Marines were far to the south around DaNang and Hi Van Pass. To the north around Quang Tri and facing the DMZ was a brigade of the mechanized US 5th Div. 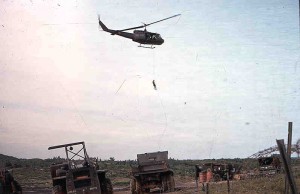 The 101st and the ARVN (Army of the Republic of Vietnam) 1st Div basically secured Hue and the coastal plain around it.  Firebases were fanned out around the area, up to the Ashau valley and Laos to the west.   Most all civilians had been moved to along the coastal plain with only a few Montenards and Vietnamese allowed in the mountainous jungle areas to the west.  That area was a bit unearthly as Agent Orange spraying had killed off most of the third layer of triple canopy forest and large dead tree trunks rose through the dense jungle.  It was a “free fire” zone, which meant any indigenous people we did not expect were “enemy” and we could shoot under the rules of engagement (ROE).

There had been a great deal of fighting around the Ashau (e.g. Hamburger Hill) in the prior years, but the division basically now patrolled the “shield” in the near mountains after the Ripcord battle.  Artillery FBs (Fire Bases) and air strikes continued harassing the NVA as they moved supplies in and along the Ho Chi Minh trail to the west.  The local populations were involved in mostly just making a living. 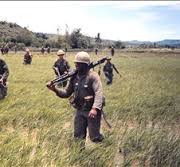 We landed at Phu Bai and were again quartered in holding buildings of plywood and metal construction, but this time with sandbagged bunkers nearby.  The first night we were treated to a movie, shown outdoors on a large wall.  That was the first time I came “under fire.”  The enemy fired some rockets at the base.  These were long range and very inaccurate and hit near the runway.  These are the same rockets essentially the Israelis experience from Gaza today.  No injuries were reported, but I did learn the difference in sound between “in-coming” and “out-going” fire.  There was a kind of crackling in the explosion as the shrapnel ripped the air when it was “in coming.”

The next day we were placed in large tractor trailer open “cattle cars” with MP (military Police) jeep escorts.  We were still unarmed as I remember.  Each jeep had an M60 machine gun mounted for protection.  We were driven north along QL1, the main north south route to Camp Evans, home to a brigade and the Screaming Eagle Replacement Training School (SERTS).  This was an eye opening trip right through Hue.  The road was paved, and most bridges were of temporary, military construction, and each had sandbagged bunkers and ARVN troops guarding them.  The old French steel bridges lay in ruin for the most part, except for the main bridges over the Perfume River.  The city was teaming with people riding bikes and small tricycle type buses.  Some small trucks were also making their way around.  Even the power lines were lower.  I was in Munchkin land!  All in all it was a very busy place.

An excerpt from an unpublished work called “Pop’s War”.