Numerous graduates of the Class of 1969 have served in the Pentagon over the past forty-five years in a wide array of military and civilian positions during periods of varying types of challenges to our nation’s security.  My own period of service there began in 1985 during a three-year tour of duty in Army War Plans.  At that time, there was a fairly large number of classmates working in the Pentagon in an interesting variety of mid-level staff positions, almost all still on active duty, during a period when the Cold War was still very much at its height.  I would return to the Pentagon again in 1995, this time for a four-year tour in a North Atlantic Treaty Organization (NATO) staff position.  Many classmates were still there, with a number serving in military positions of considerable responsibility (Mike Nardotti, Jack von Kaenel, and Bob St. Onge—to mention just a few), and others serving in the Office of the Secretary of Defense (OSD), Army, and Joint Staff positions and addressing new challenges in the post-Cold War world.

My final six-year period of service in the Pentagon began in 2000 following my Army retirement in 1999, when I returned as a civilian working in support of the Army.  It was during this time in late 2001 when I, along with thousands of others in the Pentagon and New York City, would experience firsthand the dramatic effects of a new era in security challenges to the nation—the onset of the global war with terrorism. 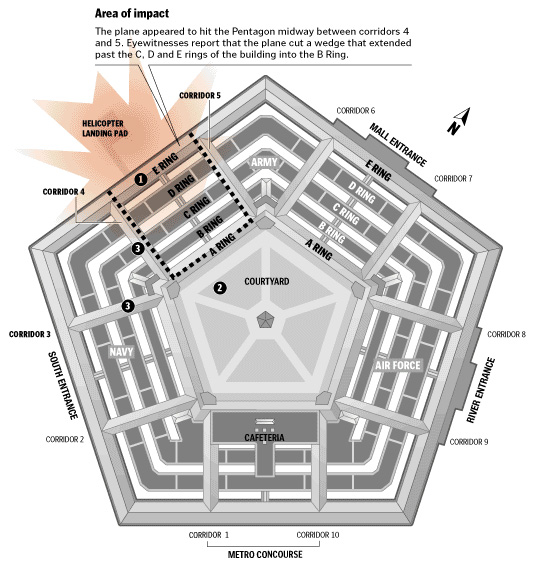 In September 2001, I was working as a civilian contractor for the Army Staff (Force Development) in Room 3C525 of the Pentagon.  On the morning of 11 September, our office learned at 0900 of the incidents that had just occurred at the World Trade Center in New York.  Being shocked at what had taken place, we immediately speculated on the likelihood of a terrorist attack and the possibility of something similar in Washington.  We soon returned to our normal work, which for me involved having a phone conversation regarding the Army Modernization Plan.  At 0938, while I was sitting at my desk and still on the phone, we felt and heard a loud noise like a nearby explosion resulting in all the windows in the office immediately blowing open.  Without a word, everyone immediately ceased what they were doing, leaving everything in place and began walking rapidly out the door into the C ring and toward the nearest corridor (5).  From there everyone proceeded to the available routes of exit from the Pentagon. Since the exact location and nature of the explosion was unknown, people went in all directions, and, like mice in a maze, kept moving until heavy black smoke forced a deviation.

Initially I recall having an eerie feeling of almost being in a dream with many people quietly but quickly scurrying about to escape from an uncertain chaos.  I remember feeling how strange this was, after so many years wearing a uniform, to suddenly be in such an environment while in civilian shirt and tie.

Once outside the Pentagon, a co-worker and I made our way toward the side of the building where there was a large fire blazing at what was the point of the explosion.  By then larger numbers of people were emerging and there was evidence of initial responses.  It was not at all apparent then that a plane had struck the building, since it was immediately subsumed within it and only the fire was visible.  From within, however, and once the fire outside diminished, the cause of this catastrophic event became quite obvious.

In the ensuing several hours outside the Pentagon, we waited in groups of volunteers to assist those still inside, watching the marvelous work of medical staff providing treatment to people scattered on the grass outside the building. We were ordered then to run from the immediate area by some who said another plane was heading to Washington. We watched as helicopters landed on the other side of the Pentagon to board military members who would establish an alternate command location if needed.

Overall, the day and collective experiences were unforgettable as we witnessed first hand the attack on our country, the initial casualties and responses of what would prove a long term battle.

As a postscript—we did reestablish alternate offices in the Pentagon that week, since our office was in the northwest part of the building damaged by the explosion and fire and no longer usable. On Friday, 14 September, I attended a moving inter-denominational religious service in the Pentagon auditorium.  On the following Monday, 17 September, President Bush came to the Pentagon to receive briefings by the Secretary of Defense (SECDEF) and the Joint Chiefs of Staff (JCS) on possible military responses.  Following his briefings, the President remained in the Pentagon and visited and spoke with employees in the large corridor outside the JCS area.  I happened to be near there at the time and walked to the area to see what was going on.  It turns out I came face to face with him, shook his hand, and said “God bless you, Mr. President.”  To which he responded “thank you” and continued to move unhurriedly to try to greet as many as possible of those gathering to see him.  Needless to say, this was a very emotional and moving time in our country’s history and for me personally.

The emotion would reach another high point at the Pentagon on the morning of 11 October, one month following the attack, when a large ceremony took place on the east side of the Pentagon, on the opposite side from where the plane struck the building, at which the President and the civilian and military defense leaders presided over a moving memorial service including the families of the victims along with thousands of Pentagon employees.  Chaplains of all faiths, including Muslim, spoke at the beginning, and President Bush concluded the event with an address that committed to the rebuilding and reopening of the damaged part of the Pentagon one year after the attack.

True to the promise in 2001, the President presided once again at another ceremony on 11 September 2002 on the west side of the Pentagon to commemorate the rebuilding of the damaged structure following round-the-clock shifts of construction teams.  At the exact point of impact of the airplane with the Pentagon, there now stood an inter-denominational chapel where services could be held.  In that chapel is a beautiful glass mosaic depicting an American eagle, the flag, and the Pentagon.  Surrounding the mosaic are two crimson rings made from 184 pieces of red glass representing each of the victims in the Pentagon on 9-11 (125 Pentagon employees and 59 non-terrorist passengers of Flight 77).

In the years since that event, America and our military have remained engaged in a long struggle whose end is not yet in sight.  West Pointers from younger generations remain actively engaged in a commitment to duty and country, a commitment that members of the Class of 1969 and countless classes before have embraced and proudly carried on at home and abroad.